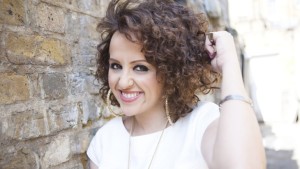 Luisa Omielan is a survivor. She’s not gon’ give up. After the breakdown of a long-term relationship, Omielan picked herself up and asked herself one question – what would Beyoncé do? Beyoncé, of course, wouldn’t want to be a broken-hearted girl, and so Omielan has turned her traumatic experiences into a truly hilarious hour of stand-up.

Omielan’s stand-up is bold and honest. Her stories are cleverly framed by lyrics and some fairly impressive dance breaks (Her Queen-B-circa-2013-Super-Bowl face is on-point). There are moments that are truly heartfelt and brought me to tears. Her story is deeply personal, but one that women everywhere can relate to.  From her own experiences, she teases out broader conversations about tired old stereotypes of women being submissive in sexual relationships and the problems we have with powerful women. For her part, Omielan bucks these stereotypes. Her jokes are filthy and brash, and she works the stage as though she owns it and deserves it – even if it is a function room and not a massive arena.

Early in the show, Omielan tries to get a party atmosphere happening. The audience is encouraged to sing along, dance, clap and whoop. Of course, not everyone is familiar with the works of Beyoncé, Adele and the modern female pop canon in general, so we were more reticent than Omielan would have liked. Some of the lyrics-based jokes flew over the heads of the bulk of the crowd, leading Omielan to implore us to do our homework before coming to a show called What Would Beyoncé Do?! These were only minor bumps in the show, however. You don’t need to be a rabid Beyoncé fan to laugh all the way through. If you are, it adds another layer of complexity and you can have a few moments of smug self-satisfaction that you got the reference.

What Would Beyoncé Do?! is a celebration of the power and resilience of women.  Omielan is a hugely talented comic who will no doubt run the world before long.

Luisa Omielan’s What Would Beyoncé Do?! is on at the Swiss Club until April 19