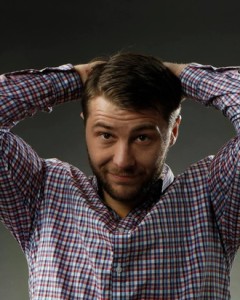 Tim Hewitt’s Suckerfish was a show run at the 2015 Melbourne International Comedy Festival that contained Hewitt and a revolving door of invited comedy acts. This reviewer went on the last night of the festival and it was clear that there was a party atmosphere in the air.

Playing his role as the MC, Hewitt weaved in and out of his material in dream like fashion and brought most attention from the crowd when he gave a Chris Farley-like impression which drew gasps when it became apparent that his head was about to explode.

Michael Shafar then got on the mic and delivered a structured set of comedy material gaining most laughs from his assortment of travel stories. His story about being robbed in Jamaica was one of the night’s highlights. Shafer is an interesting work in progress who demonstrated great skills of storytelling. All that seemed missing with Shafer was a bit of bravado when he steps up to (boss) the mic.

Rob Caruana got onto the stage and wasted no time getting involved with some banter and crowd play. However, after bringing technical props into play, he experienced technical difficulties which prevented him for moving into his material.

Ryan Coffey then closed out the night and delivered a solid power set of gags which served as a taster for his Heartbreaker show. He’s got a real stage presence and gave the air of a seasoned pro as he drew laughs from his beard-related comedy. Which begs the question… Were beard gags so popular when they were last in fashion in the 70’s?  He closed out with a one man musical piece using unique a unique style of beat boxing which had the crowd in stiches.

The overall show wasn’t the most polished this reviewer had seen throughout the festival, but it’s clear that Tim will be better for the experience of having his MICF  debut under his belt.