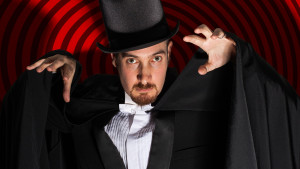 Lee Naimo (Axis of Awesome) is a multi-faceted character. Between musical comedy, improv and sketch, he has many skills, all of which are brought together in Definitely Not A Trap – a truly joyous show, filled with unremitting silliness and infectious energy.

Definitely Not A Trap is Naimo’s second solo show, following the success of last year’s Finding Lee. Again, he presents a grab-bag of bits. The sketches are as diverse as they are hilarious, ranging from bush poetry to Italian bee farmers to questionable puppetry. Naimo’s musical talents are also on show, via his support act – a Johnny Cash impersonator. The quality of the sketches is consistent. It’s a tightly crafted show, but Naimo’s performance makes each moment feel spontaneous and full of life. His experience beyond his solo work is very apparent.

Naimo worked well with the crowd, though he admitted that he did know most of the audience in that night. There’s enough audience participation in the show that odds are you will be called on at some point – I got to experience some early birthday celebrations. The participation is all good-natured and a whole lot of fun. You leave the show feeling as though you know a little bit about everyone you’ve been sitting with for the past hour.