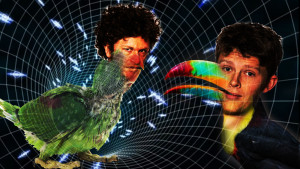 Capperjack bill themselves as a sketch duo like no other and they sure aren’t kidding. Nick Capper and Jack Druce perform an off the wall strand of sketch that, no matter how bat-shit crazy each sketch gets, feeds a narrative arc. They also bill this show as the second in a saga but missing the previous instalment won’t affect your enjoyment of this hilariously wacky story.

The main gist of the tale involved Capper and Druce as co-hosts of a talk show. They were getting restless so they approached their benefactor Diesel Guts Calhoun about changing the format. This led to the creation of a show within the talk show, Ernest Capper and the Low Flying Duck, complete with Jack Thompson-esque narration, visuals and an epic ballad.

The talk show element allowed them to poke fun at this television format and perform some hilarious commercials during the “breaks”. The action also moved to the world outside of the talk show, a world full of ridiculously grotesque characters and a twisted logic of its own. This gave them plenty of excuses to dress up and put on silly voices (particularly Capper) which was a hoot. When minor characters threatened to outstay their welcome, it reeked of indulgence but added to the insanity.

This was a rather dense script that threatened to trip them up at one point but a quick thinking techie reset the scene for them and we were back on track. There were lots of crazy ideas thrown into this show and even when they seemed quite random in isolation, it all tied into the narrative beautifully. We saw plenty of word play, butchering of phrases and deliberately lame concepts taken to extreme lengths. There were even some cheeky jibes at the comedy industry to appeal to the comedy nerds / comics.

One puzzling thing was the game cards distributed to the audience as we entered the venue. These suggested that we were to play an interactive role in the show but when the relevant scene rolled around, we were relegated to the roles of extras with no input other than being warm bodies and applauding the on stage action. I guess this baffling experience fitted in with the surreal nature of the show.

This pair worked perfectly as a comedic duo with Druce’s droll demeanour suiting the role of straight man while Capper spouted all sorts of silly nonsense. When they were playing themselves, these were wonderfully heightened versions that gave them licence to poke fun at each other’s real life achievements.

With an insanely short Fringe run, you’d better rush if you wish to catch the awesomeness of Capperjack.