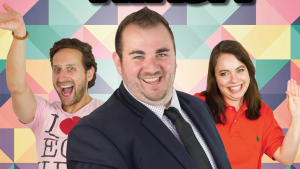 In #1 Ninja, Dan Pavatich helps you achieve your goals through the power and strategies of the ninja way. Sort of. It’s part self-help, part sketch and all very, very silly. Pavatich is ably assisted by Ivy Latimer and Andy Balloch, who each perform a variation of Pavatich’s #1 Ninja self-help seminar, as well as a bagful of characters.

#1 Ninja feels like a show that’s still finding its feet. The conceit of the self-help seminar was a lot of fun, but the sketches that were interspersed between these bits didn’t always gel.  Some of the sketches were thematically disjointed, like a sketch about The X Files that went on a little too long. Others felt tonally out of place. A sketch about a boy’s weekend near the start of the show, for instance, went to a dark place without enough laughs to bring it back up. But having said that, there is a lot to like about #1 Ninja. Even though they didn’t quite work as a whole, taken individually, there were laughs to be had in every sketch.

There was some very clever repetition throughout the show, playing with the theme of each of the three self-help gurus within the framework of a set of re-used sketches. All three performers had moments to shine. Pavatich was at his best when the ninja mask was off, pulling painfully awkward faces on the deck of the Titanic. Latimer deftly portrayed a diverse range of characters, from a frighteningly perky TV co-host to a gruff and sweary office worker. Balloch was incredibly versatile, proving to be just as adept at playing serious moments convincingly as he was at playing up comedic moments for all they had.

#1 Ninja has the bones of a really strong show, and performers with enough talent to deliver it. With a little tightening and finessing, it could definitely be something great.