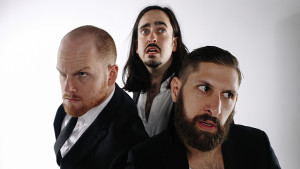 Aunty Donna are terrifyingly glorious in their ‘New Show’. It’s a sweaty spectacular, dripping with success.

What do Jesus, Pitch Perfect and an Australian promotional campaign have in common? These are just a few of the little tasty sketch creations in Aunty Donna’s New Show. Firstly, these boys are brilliant. They’ve risen through the ranks, with success on YouTube, their web series ‘1999’ and with their ABC iView’s ‘Fresh Blood’ pilot. Although, these videos are entertaining and so quotable, nothing beats seeing them live.

Be ready to be brought in to Aunty Donna’s world. It’s fast, magical, and God damn hilarious. It feels like they’ve invited you into their imagination. There’s a childlike wonder throughout, met with strong technical and performance ability to back it up. It will feel like a dream, but the best dream you’ve ever had.

Aunty Donna are the kings of audience participation. They create a nervous, excited energy amongst the crowd whether they are picking people to go up on stage or climbing over chairs to give a few audience members a close up they never knew they needed.

In terms of space and props, it’s minimalistic, evidently showcasing how much these boys can do with very little. This trio are incredible performers, with an enthralling stage presence and confident acting ability. They have definitely hit the mark with this one.

Understandably, Aunty Donna have an ever-expanding fan base. They stick around to meet fans after their show, proving not only are they genuinely great at their craft, but they are genuinely great humans.

There’s never been a better time to jump on the Aunty Donna bandwagon.‘So where the bloody hell are you?’ It better be on your way to Roxanne or to comedyfestival.com.au to get yourself a ticket to Melbourne’s International Comedy Festival’s golden ticket.

Aunty Donna’s New Show is on at Roxanne until April 16.