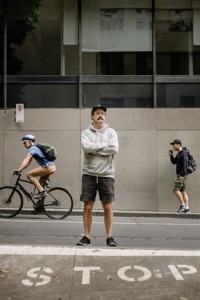 As the lights came up at the end of Not A People Person, I could hear a man in the row behind me say, “Well, that was different,” in the sort of polite, inhaling-while-talking tone that suggested he wasn’t totally on board with what had happened for the past hour. It’s a lot to take in. Sam Simmons fills your head with so many bizarre images that you do leave feeling a bit dazed. But you also leave with your face in pain from laughing and your spirits uplifted.

Simmons is an expert in crafting perfectly-formed little nuggets of silliness. They’re packed with nostalgia and the familiar, but then beautifully contrasted with complete absurdity. There’s weird moments in suburban food courts, bird ethics and a healthy fascination with the Dulux Colour Wall. Simmons’ collection of props bring another layer of absurdity to the proceedings, a pair of kangaroo paws being used to particularly great effect. The sound production in Not A People Person is excellent, Simmons’ interactions with various voiceovers providing some of the funniest moments of the night.

From the second you enter to take your seat, Simmons challenges the audience and breaks through their comfort zone. It’s a theme that continues throughout the show, Simmons often pausing to yell at the audience for not being creative enough to enjoy themselves. Not A People Person feels designed to sort those who are willing to go with it and have some fun from those who are not. You’re never quite sure if Simmons is genuine in his anger or if it’s all part of the act, but really, what does it matter? It’s hilarious.

In Not A People Person, Simmons is presenting comedy in a pure, joyful form. There’s no serious underlying message. There’s no social agenda. You go in, you laugh until you hurt, and you forget about everything else. You can’t get better than that.

Sam Simmons – Not A People Person is on at The Forum, Upstairs until April 3 – An extra show has been added at The Arts Centre Playhouse on April 2