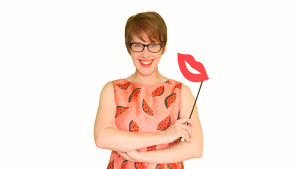 With the title Never Trust a Man With Thin Lips you could assume that you’re about to see an hour of relationship advice from a woman bitter and twisted from all the bastards she’s dated but the reality is far from this. Megan Mckay presents herself as a cheerful, terminally single 40something with a kooky outlook on life in this delightfully fun confessional show.

This show is a series of wonderful routines describing the first world problems she endures as well as some of the small victories achieved along the way. Megan tells of the minefield that is long distance relationships, her problems with keeping track of her finances, excitedly brags about an award for excellence she obtained and tells us of a modern application for Phrenology.

The hour is jam packed with Bait and Switch type jokes; it’s the perfect delivery vehicle for this material. Plenty of unique, amusing lines keep the audience in rapt laughter. There’s a thick coating of self-deprecation on almost every line with a bit of snark on top and plenty of clever digs at the world around her. This steers the show away from being comically tragic as we would normally expect from this premise and gives it a unique spin. She sees the world in a delightfully eccentric way using colourful turns of phrase to keep us on our toes and chuckling.

It’s impossible not to fall under Megan’s spell as she’s just so damn likeable. She comes across as a lovable loser persona and with an über confidence that is so joyful and optimistic that you can’t help going along for the ride. To younger folks she’s the slightly embarrassing aunt who’s great to chuckle at but those her age and older can relate to her tales and laugh at themselves as they are cheering our hero on.

Staying as far as possible from any important or weighty topics, this is a delightful hour of thoughtful yet fluffy confection. A delicious treat served by a charming lady to boot.