5 Good Reasons from The Big HOO-HAA!

1) 24 hours of Melbourne’s best improvisers running low on sleep and high on energy.

2) It’s presented by The Big HOO-HAA!, who have been making audiences howl with laughter for over 10 years in both Perth and Melbourne.

3) A show as interactive as you want it to be – join right in or sit back and watch the chaos.

4) Tickets are $24 and you get a dollar back for every hour you stay – plus it’s right near the Fringe Hub in North Melbourne so it’s easy to pop in and out!

5) How often do you get the chance to be part of a 24 hour comedy show? In the past these roller coaster events have a achieved legendary status in comedy folklore. You don’t want to miss this one!

For One Night and One Day Only (Just as Well!) From 8pm on Friday the 4th of October through Saturday 5th of October at The Czech Club in Queensbury St, near the North Melbourne Town Hall. 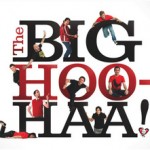 Running in Melbourne since 2010, The Big HOO-HAA! is a regular feature in the local comedy calendar.  Throughout the year, the team presents their improvised comedy once a week at the Portland Hotel. But now it is festival time, and it is ON – four nights a week. Two teams, the Hearts (Sarah Rueben, Liam Ryan, Charlie Sturgeon) and the Bones (Brenna Courtney Glazebrook, Adam Kangas, Matt Saraceni) , battle it out in a series of improv games.

It can be a scary thing, going to an improvised comedy show. It’s all spur of the moment, there are no safety nets and there is every chance it could all go horribly wrong. But when it is good, it is an amazing thing to see. The Big HOO-HAA! is one of those great improv comedy experiences. With a strong cast of performers and some fantastic games, you are in for an incredibly entertaining (and often baffling) hour of comedy.

The show was consistently funny, thanks to the amazing cast. All of the performers had their moment to shine. Every game produced something brilliant – from the overplayed drama of ‘Oscar Winning Moments’ to the short, sharp gags of ‘Arnie’. The host, Emmet Nichols, kept the show fast-paced and kept the audience giggling. The audience is frequently encouraged to get involved, being asked to shout out suggestions for topics and vote for winners of games. If you are extra enthusiastic, you may even earn yourself an ‘I tried’ sticker.

The Big HOO-HAA! is a great way to start off your evening at the festival. Every night there is a

different cast, a different bunch of games and an entirely unique set of comedy – but there is always something to please.

The Big HOO-HAA! is on at Roxanne until April 21, and continues after the festival every Thursday at the Portland Hotel.