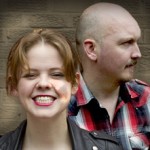 Imagine, if you will, a battle royale where your weapon of choice is Shakespearian verse. Your guide is Caliban. Your enemy, Tybalt. Now imagine it in a small room in the Victoria Hotel, with next to no budget and a smattering of Star Wars references and you have something like Shakespeare Fight Club.

WATSON (Tegan Higginbotham and Adam McKenzie) are joined by Cameron McKenzie and Liam Ryan in bringing this stage spectacular to life. The whole production feels like a play a bunch of kids are putting on in their backyard. The props and set are made from bits and pieces from Bunnings, the costumes are huge, and the levels of enthusiasm are through (the incredibly low) roof. If you’re after a polished piece of comic theatre, this isn’t it. This late night show is hilarious chaos. Shakespeare Fight Club seems to be a show that the comedians are going to see. There were several in the audience the night I went, and it made the show self-conscious at times, as though they were playing to the comedians rather than the whole audience. One laughed exaggeratedly at a few jokes that missed the mark, which disrupted the flow of the show early on, however this was turned around to great effect during a scene in which Higginbotham hypnotizes McKenzie.

But Shakespeare Fight Club has some great moments. Liam Ryan’s Caliban is creepy in the best possible way. The fight scenes are brilliantly choreographed – there is even some shadow puppetry. The on-stage relationship between Higginbotham and McKenzie is one that really works. Higginbotham’s self-interested straight woman is the perfect foil to McKenzie’s endearingly dorky fool. The jokes are hit-and-miss, but they are delivered with such gusto that you just don’t care.

Shakespeare Fight Club is Shakespeare as it is meant to be seen – violent, very silly and full of dick jokes.