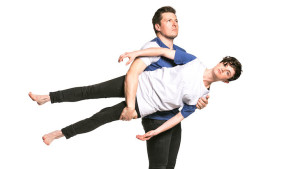 Angus Brown and Demi Lardner are off to mortician school! It’s meant to be an adventure, but things take a dark turn when dead bodies start turning up where they shouldn’t. With the cops getting tangled in a web of confusion, it’s down to Angus and Demi to solve the mystery and save the day. Of course, it’s not quite as straightforward as that.

‘Best Good Show’ is at its best goodest when Brown and Lardner stray from the plot and make things weird. A series of bizarre voiceover interludes and repeat appearances from a prejudiced duck added a hilarious layer of absurdity. A sketch about horse divorce reached genius levels of idiocy. The main story gets confusing at times, but you just don’t care – the sketches are that much fun. The writing is witty and clever, yet exudes a childish joy – a well-thought-out variety of stupid.

Brown and Lardner are a fantastic comedic team. They play off each other beautifully and their experience working together really shows. Their banter makes the whole show feel fresh and spontaneous. A couple of tech hiccups throughout the show were handled so deftly, it’s impossible to say whether they were a deliberate part of the show or not. Any moment where things felt like they were going off the rails only added to the mayhem of the hour.

Brown and Lardner have created a show that is perfect for late night. It’s silly, chaotic, a whole lot of fun, and getting a chance to see their sweet dance moves is worth the price of admission alone. ‘Best Good Show’ is a terrific way to finish off a night out at the festival.