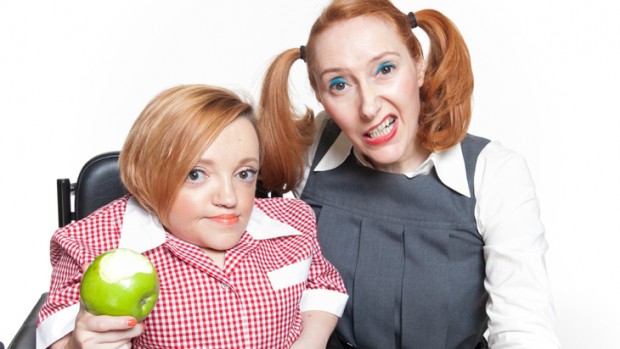 In 2012 Fiona Scott-Norman edited a collection of stories from well-known Australians about their experiences at school, Don’t Peak at High School from Bullied to A-List. It’s not only a noble idea but a wonderful read and for this year’s festival Scott-Norman has curated a show around the same theme.

Hares and Hyenas bookshop in Fitzroy has been converted to a smart little venue for the festival season and with comfy chairs, a well stocked bar and charming service one can only hope it becomes a permanent spot for live comedy and theatre.

There’s a rotating cast of comics enrolled in the Don’t Peak class of 2013. Opening night featured a mixed bag of tricks with clear highlights from the ever reliable Nelly Thomas and the wonderful Stella Young. Thomas talked about both being bullied and being the bully and performed a killer rap about a about the chicken Hawaiian pack.  Young touched on political madness gone wrong and on her own experiences at the hands of the “mean girls” from high school. It’s a rare talent who can deliver humour and pathos in such a brief set but Young absolutely nailed it, I was moved from laugh out loud to sucking back the tears in about ten minutes. Imaan Hadchiti delivered a solid performance with some good physical comedy.

When you have four performers to move through in an hour the role of the MC is super important. Unfortunately the MC for the evening, Jacq Tamlyn, was not up to the task on this occasion. Tamlyn’s upbringing and background appear to be packed full of rich material (crazy family, gender identity issues, high school tantrums) but Tamlyn has not been able to craft that material into a successful routine. This show needed an MC to maintain the momentum and move things along quickly but Tamlyn felt the need to perform material in between each act, stretching the show out unnecessarily and forcing it to go over time by 45 minutes. As the final performer, Scott-Norman didn’t stand a chance. Maybe she was concerned with the show running overtime or perhaps she wasn’t on form but her material about her experiences as a lonely teen at boarding school should have packed a lot more punch and the delivery was flat.

I took along a real-life High Schooler (the only one in the audience) and she really enjoyed it. There was a bit of colourful language and some adult themes but nothing she couldn’t handle and the performers interacted with her really warmly. With issues focused squarely on the vulnerable teen years and with a real lack of shows aimed squarely at that market it seemed like a missed opportunity not to promote this as a show for the oft-neglected 13-16 market.

This is a great idea for a show with some talented folk on board; unfortunately based on the performance I saw I can only grade it “Needs improvement.”