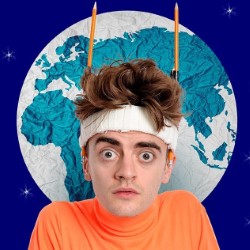 My first random pick of the Fringe and I’m glad I had the gap in my schedule as it was a hilarious hour of goofiness about nature (with a serious message hidden inside the chocolatey comedy coating). The room seats about 60 people (very cosily) and was jammed full on day two of the Fringe.

The show opens with a rather scary scene (well, it terrified one little boy down the back of the room), where Luke plays an angler fish. From there we are led into the world of David Attenborough (or a close approximation) and the world of animals both tiny and huge. The audience is asked before the show to write the name of their favourite animal on a Post-It Note, which Luke may use during the show in a sketch. There is also a little audience interaction, but nothing too scary or demanding.

If you’re a fan of nature documentaries or cute fluffy animals (like an eight legged friend that appears at one point – a warning for the arachnophobes out there), or you just love comedy with lots of energy, props, jokes and a message, then you will love this show. The packed audience at the show I saw certainly had a great time. See it and save the world.

Luke Rollason’s Planet Earth is on at Monkey Barrel until August 26
https://tickets.edfringe.com/whats-on/luke-rollason-s-planet-earth-1