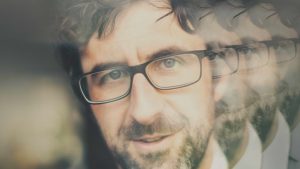 Mark Watson has a plan: to get to know people better, to tap into their inner lives, and to figure out what makes them tick. He tells us that things have been tough for him recently: the farce that is Brexit serves as a constant reminder of the sorry state of his native Britain, while a divorce in the past year has left him a little worse for wear. And it all makes for a fast-paced, genuinely enthralling 60 minutes of laughs.

You can really tell that Watson isn’t new to the comedy scene. There are some comics out there whose calibre of performance doesn’t reflect the amount of time they’ve been slaving away in dimly-lit bars, community halls, and comedy venues in search of cackling laughter. Neurotic, and often spluttering out his words, Watson is a comic with ample control over his material, the mood, and ultimately us as an audience.

There’s never any doubt – despite how “off-track” things may sometimes seem – that Watson is always pulling the strings. His random yet seamless interaction with the audience is truly, astonishingly good. Watson’s pre-organised material on his life as a stand-up, his divorce and his son’s “insubordination”, as Watson puts it himself, is invariably well-executed.

But it’s his spontaneous efforts working the crowd that stands out. Granted, on the night I saw his performance, there was one audience member who made good comedic fodder for Watson to latch onto; though he never failed to satisfy and up-the-ante during these little moments of exchange.

It’s early days in the Comedy Festival, yet it’s hard to see that many shows are going to eclipse what Mark Watson is producing right now. Bereavement may be the worst thing to go through for a person – as Watson tells us in his show – but missing his show might be high up on that list.

The Infinite Show is on at Melbourne Town Hall until April 21
https://www.comedyfestival.com.au/2019/shows/mark-watson 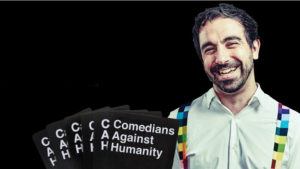 No individual comedy show is replicable. Even those that are scripted and rehearsed cannot produce the exact same content and flow over consecutive performances. Audience interactions may vary, the comedian might take a swill of beer at different intervals, a stronger emphasis might be applied to a line that’s “killed” over the past few nights. A show like Comedians Against Humanity takes this idea to the extremes, because its improvised and disorderly nature means that every performance is bound to barely resemble its predecessor. For this reason, it’s difficult to review; the next incarnation of it, for all I know, might be much better, or much worse. Or even of the same pedigree.

The show is essentially just a bunch of comedians playing Cards Against Humanity, with some degree of audience input (many of whom, unfortunately, fancy themselves as comics). For those unfamiliar with the game, it means that the performers must enact sketches by reference to strange and bizarre cards they’re handed, that say things like “I’ve created the world’s newest religion” or “Nicholas Cage’s face”. The only other constant of the show is that it’s always hosted by Agisilaou. The comedians called upon to play, I’m told, are different each show. The performance I saw featured Australian comic Rama Nicholas, and Brits Mark Watson and Chortle Editor Steve Bennett. Agisilaou kickstarts the night with a bit of an explanation of the game, its rules and decorum and what to expect (beware to those who dare to come in late, you might stumble in at an inopportune, apparently offensive time). Then they proceed to play several games: pretending to pitch a movie, hold press conferences, and preside over interrogations.

The very nature of the show is up-and-down. Some moments are riotous, and others are quiet and still, as the performers mine their brains for something funny to say. The first thing that strikes you is how hard the format of the show is on the comics: they’ve got to be lightning quick in spitting out jokes, and their comedic prospects are dependent, basically, on what’s written on a card or two. Not all the jokes and utterances deliver maximal impact. But that doesn’t matter because at other times, there can be spates of jokes that come off well. I think the key to this kind of show is momentum and rhythm: when you don’t have any you’re in trouble, when you’ve got it you better make the most of it.

There’s also a sense that one night you might have the comedic touch, and the next you mightn’t. At this performance, Mark Watson and Steve Bennett were in fine form. They delivered the largest and most regular laughs. Despite a modest showing in his first solo game, Watson proved himself a quick-witted comic; you can’t help but be impressed by him. I, for one, am now inclined to check out his stand-up routine. Bennett was consistently funny across the show. His comedy is of a quirky, definitive kind, and his awkward disposition on stage invariably engages us. The two of them complemented each other; Watson’s verbosity combined well with Bennett’s concision.

Nicholas felt a little off her game. She said the least in the group games, and her jokes were hit-and-miss. Although, her “press conference” as a redneck American author provided numerous laughs. Maybe another night might’ve been friendlier to her. As the host, Agisilaou was reliable. Through the night, he acted more as a facilitator than as a participant of the game, so this meant the best lines were usually reserved for the players. When he had the stage to himself at the start of the show, though, he was able to display his ample comedic talents.

Comedians Against Humanity is showing at the Athenaeum Theatre until April 21.

Tickets are available at: https://www.comedyfestival.com.au/2018/shows/comedians-against-humanity-hosted-by-yianni-agisilaou 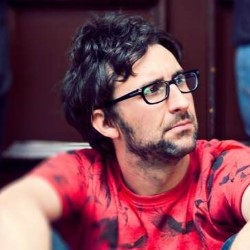 Poor Mark, here he is performing a show to mark his tenth anniversary at the fringe, where he details his gradual mental breakdown from stress and performance anxiety, and tonight’s (Friday) show was full of lunatics determined to send him back over the edge.

The patrons became as integral to this performance as Mark himself. The front row consisted of a stag party from Surrey, with the stag dressed as a “Jimmy”, behind them was the youngest person in the audience, a 14 year old called Brecon whose dad was determined to explain how he came to give his son that name (something about beech trees, apparently), and behind them was a gaggle of Edinburgh ladies who had dumped the kiddies for the evening and were determined to have a big night out. The audience, collectively, also tried to steal Mark’s most important, and probably irreplaceable at short notice, prop.

So I can’t say it was a typical performance, but it was a hoot. When Mark was given the chance to perform, we heard about his drinking and anger issues and how he was working through them, as well as stories about how supportive one of his children is. Mark’s performance was brilliant to the point of bravado, he is a very engaging person on stage despite severe provocation from a boisterous crowd. Ten years of Fringe performances have clearly given him the skills to wrangle the wild life into some sort of attentive assemblage. This also had a lot to do with the show itself which was wildly entertaining and well worth seeing.

Mark has changed a lot in ten years and since I first saw him. He’s still the energetic funny guy but he isn’t the ‘Welsh Comedian’ anymore, he was putting on the accent for comedy reasons and part of dropping it seems to be about discovering who he is and revealing that to us. It appears to have been a good idea, for him and for his audience.

Mark Watson is performing Flaws at Pleasance Courtyard.
For Tickets and more information go to the Edinburgh Fringe Website: