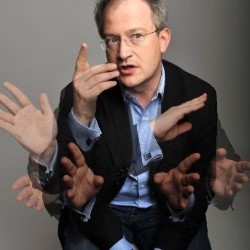 Imagine if you will, a man whose mind works like a roulette wheel which lands on a different number every minute. Each number corresponds to an idea, thought, interesting story or fact which are all totally unrelated to each other. That is how Robin Ince’s amazing show manifests itself before a delighted and mesmerised audience.

We started late due to a technical problem and the person organising the queue caused chaos by trying to move everyone about (we weren’t delighted). This may have been disaster for another kind of show. Robin came out while we were shuffling about, apologised, chatted to various people and wandered round until everything was ready. Then, as the audience was getting seated Robin started showing slides of interesting things and people while repeatedly explaining to the new arrivals that this was not the actual show yet. The irony of the show’s title became so amusing, that you could occasionally wonder if it was all planned.

It turned out that the actual show was indistinguishable from the walk-in chat, as Robin reminisced about working with Brian Cox, opened up about getting older and his father and mouse problems,  discussed marshmallow tests, fascinating mathematicians, knitting paintings, the worries that his wife had when he announced he was having a year off from comedy, going into psychotherapy, walking on the moon and, *breath*, so much more.

As Robin explained, every show is different as he randomly chooses slides and stories for each performance. Chaos of Delight wasn’t all hilarious but it was all entertaining. When I saw it the Audience were riveted. If your idea of fun is a massive amount of random facts and stories about the world and its inhabitants, this is a must see show. As Brian Cox would say: Brilliant!

Chaos of Delight is on at Gilded Balloon at the Museum until August 26
https://tickets.edfringe.com/whats-on/robin-ince-chaos-of-delight