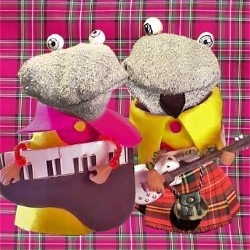 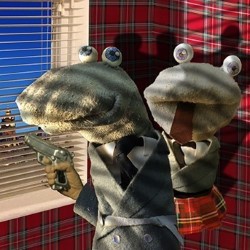 Becoming a bit of an institution at the Edinburgh Fringe, this year in Minging Detectives the socks are tackling the world of crime, going back through all the great detectives in history and showcasing their skills. The Socks sing some enchanting songs – about racism in the police force and a jihadist lament to name the two most potentially offensive ones. They impress us with a little piece of Shakespeare, a lot of “there’s bin a murdurrrr” ala Taggart and manage to handle a few extremely mystifying interjections from the audience when asked for crimes or crime shows. We get references to most of the great Scottish detectives, some Sweeney, a dash of Morse, a touch of Juliet Bravo, a little bit of Scandanavia and a smattering of the States, but it’s mostly gangsta and Dixon of Dock Green. As always they dazzle us with hard hitting groaner puns, amazingly fast costume changes and very silly jokes.

A thoroughly enjoyable hour of entertainment provided by the astonishingly talented Kev F Sutherland, who writes and performs the puppet double act stuck in a sweaty box on stage. He’s been doing this for about ten years now and you can check out their fabulous videos online which will really whet your appetite for seeing them live which is a fabulous experience.

This show starts at 10.30pm and it starts ON TIME. I rushed from another show upstairs and got in three minutes after the official and actual start time. Whatever happened to late night shows starting half an hour after their official time? Get a ticket, get there early and get ready to laugh at some very offensive jokes and songs performed by some cute (grey wool blend, I’d say) Socks.

At The Gilded Balloon