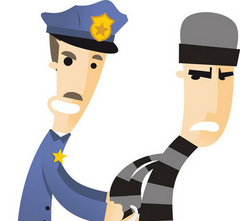 Joining the Victorian Police in 1974, Steve Thomson saw many crazy things during his twenty years in the Force. It is these wild but true tales that form the basis of his Comedy Festival debut. He has a catalogue of fascinating stories that are regularly funny but his abilities as a comedic storyteller are still in the “telling stories to your mates down at the pub” stage.

We were regaled with tales of misadventures at the morgue, the difficulties in apprehending tricky perpetrators and some unexpected outcomes of standard police procedures. Those expecting sexy drama ala TV cop shows will need to look elsewhere as these are humble tales from the front line by a foot-soldier who happened to be in the wrong place at the wrong time.

Steve doesn’t provide much in the way of background to his Police career in either his introduction or conclusion; he begins by launching straight into his first story. Overhearing him speaking with some other audience members, he seems more than happy to chat about these details after the show.

He goes into immense detail in the telling of his tales, seemingly using real names and locations to set the scenes. While this certainly paint a vivid picture and counters the “people don’t believe that these stories are true because they’re so crazy” argument he points out at the top of the show, not all of it is vital in relaying the humour.

By ploughing through the chronological details, he doesn’t structure his tales so that they build to a punchline; most of them end by trailing off naturally instead of a with a witty quip. He certainly doesn’t seem to have embellished his stories in order to extract maximum laughs, they simply state the crazy facts. Some callbacks are worked in to great effect as he successfully manages to relay to us what was going through his head at the time.

His training as a presenter clearly provides him with on-stage confidence and he is amiable in his stage presence which allows him to easily hold an audience’s attention. There is something slightly perverse about his jovial attitude combined with the sometimes violent nature of his stories. It will appeal to those who don’t mind a little bit of dark humour but thankfully it doesn’t get too graphic.

In spite of his inexperience on the stand up stage, he has put together a fascinating show that manages to get the point across. It’s laugh rate is not exactly high, but you will have a chuckle with an interesting bloke.

Police Stories is on at Palomabar