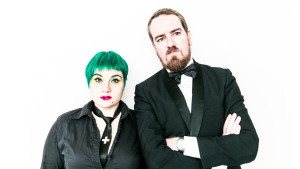 Lisa-Skye & Nick Caddaye could have named their show The Odd Couple, they are such a comical pairing. The older and wiser, grumpy Nick clearly has a love for and a great deal of experience with sketch comedy, Lisa-Skye has less experience in sketch but does a fabulous job as exuberant second banana to Nick’s uptight straight man. And does this show have bananas?! This show has bananas.

Lisa-Skye has been performing for several years and is a completely unique presence on the Melbourne comedy scene. As well as her own standup shows she’s been doing late night alternative chat shows or ‘Tea parties’ at The Tuxedo Cat, this has helped her become very relaxed on stage, experienced at bouncing well off other performers and adept at audience interaction. It’s great to see Nick on stage again since the demise of his first comedy duo Mr Al & Mr Nick and being the performer & mastermind behind the sketch troupe Anarchist Guild Collective. In recent years he has been concentrating on writing and directing, which has included The Fabulous Christmas Panto for adults The Terminativity and directing Rama Nicholas’ Death Rides a Horse and Lisa-Skye’s Song’s My Parents Taught Me. I remember thinking when I heard he was directing Lisa-Skye that it was a bit of an odd pairing, but obviously they saw the comic potential and decided to put on a show together, and joyfully, it actually works.

Despite the comical bickering and teasing, the thing that clearly connects them is their deep sense of political outrage and although it is mostly kept in the background, it is the backbone of the show overall. The few overtly political skits threaten to let them down, with all the changes and upheaval that have happened in our Federal government since this strongly scripted show was put together, but Nick and Lisa-Skye handle it beautifully still getting lots of laughs, while sympathising with their Fringe colleagues working on Abbott! The Musical.

A lot of the sketches are just delightfully silly mucking around, some food and a fake thingy are thrown about and there are a string of advertising sketches, the highlight being a father and transgender offspring selling pergolas that was so funny it had people nearly falling out of their seats and I found it hard to breathe. I suspect it will be the highlight of my 2015 Fringe.

It’s at Tuxedo Cat so you know it’s going to be unconventional and edgy. This also has intelligence and pizazz. Everything about this show is well thought through, including the lighting and sound which are well conceived and brilliantly employed.

A fabulous sparkly sketch show for grown ups at The Fringe.