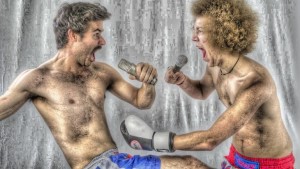 In one corner we have Sam Kissajukian, hailing from Sydney and sporting a killer mo. In the other is the terror from the UK, the man with the ‘fro, Kyle Legacy. Referee Ruven Govender is here to make sure it’s a clean fight. LET’S GET READY TO RUMBLE!

From the advertising you could go into this show expecting an hour of roasting and Yo Mama jokes but there is so much more to it. While there are some amusing insult flinging and a vague bit of boxing, this is comedic battle that tests the comedic abilities of each performer with judging by a panel. Round one gives us straight stand up to show what kind of performer they are. The second round borrows from Set List with the comics using random words supplied by the audience to create a set on the spot. Round Three sees the audience throwing heckles for the performers to deflect while round four is the mystery round where anything can happen. The final round is where the actual boxing comes into play with the points leader getting a chance to take swings at the other, complete with gloves and trunks.

Referee Govender opens the show with a short spot to warm up the crowd. Born in South Africa and moving here via New Zealand, he treats us to some hilarious material about his cultural background and experiences in a foreign culture. Although he dresses like a ref in a tuxedo, he doesn’t play up the boxing angle too much and just treats the show like a regular emcee gig with the added battle administration.

Kyle Legacy is a performer that relies on audience banter quite a bit and this permeated through all the rounds. There are flashes of inspired hilarity in both his prepared material and improvised gear but he is soon back to sparring with the punters and flinging amusing insults when lines fall flat. He’s a bit aggressive and patchy but entertaining nonetheless.

Sam Kissajukian on the other hand is almost the polar opposite of Kyle, being self-deprecating and a touch whimsical. He flounders as he interacts with the punters, but the way he carries himself on stage when the put downs are weak is perversely amusing. His mystery round on this night was an elaborate scene involving striptease, Zorro and a carrot swordfight. It was inspired lunacy that Legacy could not hope to compete with.

While many boxing elements are included (such as a bell to signal the end of a set / round and rousing, pumping intro music) they don’t push the concept too far. The combatants are dressed in street clothes until the ring garb emerges at the end, many sporting tropes are left out and the hoopla is a little subdued. Obviously the visions I had in my head for a boxing themed show were a little too excessive but the reality is appropriate and satisfying.

The improvised, heckle and mystery rounds promise a different experience each night and with all the interactive elements involved, a rowdy crowd adds to the enjoyment immensely. It’s a clever and fun concept that is worth checking out.