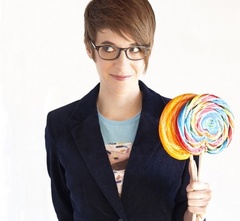 Canadians are so gosh darn adorable, no matter how filthy they are or even when they are insulting the audience and I think we have found the most adorable Canadian of all. Even before DeAnne Smith had officially began her show, she was heckled rudely and her handling of it was breathtaking. Her ability to put him in his place while make the audience laugh and feel at ease suggests years of stage experience and excellent people skills. It also failed to throw her off from performing another ace comedy festival show which confirms why she was nominated for The Barry last year.

The title, Living the Sweet Life is unsurprisingly ironic and to help demonstrate this DeAnne picks an audience member out for special consideration. It may or may not be in your interest to sit in the front row, depending on how shy you are. Her own sweet life includes parent’s who have become too comfortable with her sexuality, her middle class liberal guilt, a date that ends in the emergency department of a major hospital and a disturbing wax incident. Waxing was a bit of a passe subject a few years ago, usually talked about by wide eyed comedians who had not been through it, but DeAnne’s experience is astounding and hilarious. Another highlight for me was her participation in a ten day silent meditation retreat, not unlike the one Judith Lucy went through in her Spiritual Journey.

If you are seriously, easily offended this one might not be for you, DeAnne discusses lesbian oral sex, watching straight porn and she tells some dick jokes, but then maybe you should try a different festival altogether. It’s hard to imagine anyone being offended by DeAnne, she puts on a strong hour of bright, perky comedy which occasionally touches on dark subject matter. The show is bookended by hilarious songs that she plays on the ukulele, surely the cheeriest of instruments. The first is a chirpy tune about death and the last about nerdy pickup lines which really reminds me of Josh Earl, as does her haircut.  A fabulous show for a girls night out at the comedy festival, everyone is bound to have a great time and if you’re lucky, you’ll catch one of her chocolates.