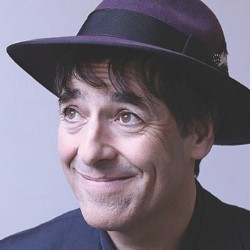 I was going to start with a warning to get there early but the front couple of rows had empty seats for ages, which is strange as Mark doesn’t do audience participation. The show itself runs for over 70 minutes, so you will also hit the Tattoo crowds as they exit on weeknights. Right, that’s the logistics out of the way.

Mark has had a difficult time this year, with a messy separation from his wife counterpointed by some genuinely surreal political actions and votes, as well as the consequences from a minor car accident. He starts by discussing devolution, Brexit and the recent UK election, giving us a number of excellent impressions of people and some cogent points on the mentality of MPs and voters, moves on the the problems in his marriage and the ridiculousness of the divorce process, delving into the dangers of getting a Portuguese hunting dog and what happens when the insurance companies sell your accident details to personal injuries claim firms (probably best if anyone from that industry keeps away from the show, as they are grilled slowly over a hot comedic fire) and finishes with a message of hope for the future.

The political material doesn’t delve too deep and doesn’t require more than a passing knowledge of the MPs but is very funny. The part of the show that looks at his divorce and the problems with dealing with mediators and dividing up one’s life is much more poignant and proves an excellent counterpoint to the madness on the political stage. The full house was exuberant in their appreciation and the show was an example of a comedian at the top of his game, brimming with confidence, comedy and heart. There is a lot of swearing, especially at insurance vultures.

Every Little Thing’s Gonna Be Alright is on at Assembly Hall until August 27
https://tickets.edfringe.com/whats-on/mark-steel-every-little-thing-s-gonna-be-alright