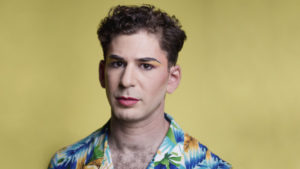 Josh Glanc is a very talented clown and yes, he is Gaulier trained, so by now you know what to expect, excellent character work, a beautifully constructed festival show, mime, laughs, the shedding of clothing, bags of audience participation and a barely comprehensible show title. So if you love this sort of thing, and clearly heaps of people do, Josh is very good at it and you should go along.

Karma Karma Karma Karma Karma Chamedian is a clowny sketch show with some tremendous set pieces including; an ‘homage’ to the Red Hot Chilli Peppers, Breakfast Television and miming to some Wil Anderson stand up which was audacious and hopefully approved of by Wil. The running gags of an American Football Line backer and a baby monitor don’t work as well, with the baby monitor gags not working and going nowhere. The highlight, was a skit I’d seen in Edinburgh that got me along to see this show and it was a shrewd and extremely silly examination of the pop dance band Acqua. Who knew they had so many (formulaic) hits?

Josh opens his show by coaxing a group of men on stage to play out their rock and roll fantasies in an Air-Guitar rock band and they do have a lot of fun playing Josh’s backup band. In doing so Josh sets up his style of show, it’s going to be very full on and silly, though he doesn’t take anyone against their will and doesn’t push them too far. Comedians like Josh really rely on the kindness of strangers and the willingness of audience members to make their show a success, he goes back to these men time and time again throughout the show. Josh is very charming and luckily pretty harmless, but I’m always amazed at how trusting and compliant audience members are with comedians. Anyone taking part should be warned though, that they have to be prepared to have sweat dripped on them because Josh is fairly scantily clad throughout most of the physically demanding show. The sweat and the hair on his body are a little overwhelming and occasionally take my attention away from Josh’s comedy antics as I watch his elbow dripping like a tap onto someone’s foot in the front row.

The over arcing narrative is a subtle autobiographical theme as Josh develops his stage persona before us. Trying out straight standup (well miming to Wil Anderson’s standup) but not being able to fit in and gradually removing his clothes til he’s almost (not completely thank god) naked and finally re-dressing in the black leotard and putting on his mime makeup where he can relax and be himself. Others have done this sort of thing, though Josh doesn’t start in a lawyer’s business suit, he implements it skillfully and despite the rather schmaltzy ending it is an excellent way to pull his sketches together.

It must have been extremely difficult to give up a future as a lawyer for that of a clown.  He has put all that hard work and energy into becoming a comedian and it’s paid off.

For tickets and information, go to the Festival website: