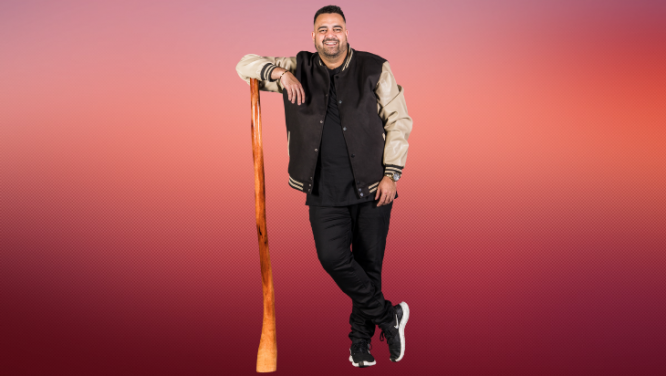 If you are hoping for some didgeridoo playing along with the laughs, as his title may suggest, Dane is bringing it. Coming from winning The Adelaide Fringe Week 4 Award, it’s hard to believe that this is only his second solo Festival show. Dane is having a great time and wants to share the fun he is having with his audience

Dane from Wagga Wagga is a country boy in the city with a twinkle in his eyes and some cracking tales to tell. A lot of these involve his whacky dad who, in an alternative universe, might’ve been a standup himself. You can see where Dane’s comedic leanings came from. Dane is a brilliant storyteller who brings the characters in his stories to life with a delightful physicality that paints vivid pictures.

Dane is keen to share his Aboriginal culture with us and what better way is there than through funny story telling, music and dance? In Didgeridoozy there is a beautiful coming together of his Aboriginal entertainment tradition and his comedian entertainment tradition. His show made me think of the beginnings of modern standup in the folk scene where Billy Connolly was doing jokes between playing his banjo, singing serious and silly songs and the standup gradually took up more and more time.

The whole show was a reflection of Dane’s didgeridoo playing – his circular breathing, the bass notes grounding his work reflect the depths of his culture, permeating and supporting his comedy, while at the same time using his friendly upper notes to tell his silly stories about his dad and coming to terms with city life. Dane’s not a particularly political comedian but the politics of a proudly Aboriginal man are there. When he does impart the odd dark political joke it’s done with an impish grin, an adorable personality and some Groucho style side eye.

Didgeridoozy is an hour of warmth, cheekiness and joy.

Didgeridoozy is on at Trades Hall until April 24