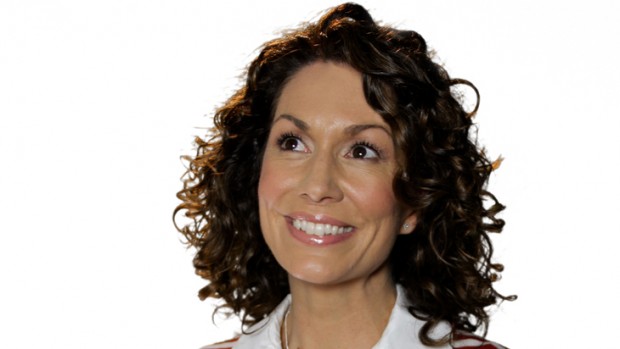 Complete with a silver lining backdrop, Kitty Flanagan walked out to rapturous applause from the packed and mostly-female crowd.  And rather than soak it in, she got straight down to business. The Hello Kitty show was a perfect platform for Flanagan to both vent and lament about life in general. In short, she nailed it.

She started by taking aim at the cabaret and burlesque “movement” with them being framed as second rate competitors to the live comedy scene. She made her point crystal clear and shared a number of hilarious personal experiences as both an MC and as a bored audience member. The story regarding the balloon-clad dancer who mistimed the application of her costume drew some of the biggest and loudest laughs on the night.

Flanagan gradually made her way to the key part of the show which has her explaining the dilemmas surrounding bringing a cat into her life. Who said there’s anything weird about 40 year old unmarried women with cats… Kitty does! During this part of the show, she demonstrated that she’s a clever comedian who knows how to milk a joke for all its worth.

Things turned contemporary as she then wove through a piss-taking tirade against lovey-dovey couples, babies, plane rides and today’s misguided youth. Her contention that rap used to be clean and wholesome is somewhat questionable (2 Live Crew were raw in the 80’s!). However, it didn’t get picked up by the smiling crowd.

To close the hour, her sister (Penny Flanagan) came on stage with her guitar and they took the audience through two expertly performed songs. If the year was 2000, she could easily have a hit on her hands with her tribute to noisy imbeciles. As for the song about religion, it was funny and (naughtily) offensive in equal measures!

It was a definite 9/10 performance from a seasoned pro who knows how to command control over the crowd. In terms of the subject content, she had men laughing and women crying throughout. Highly recommended for all!