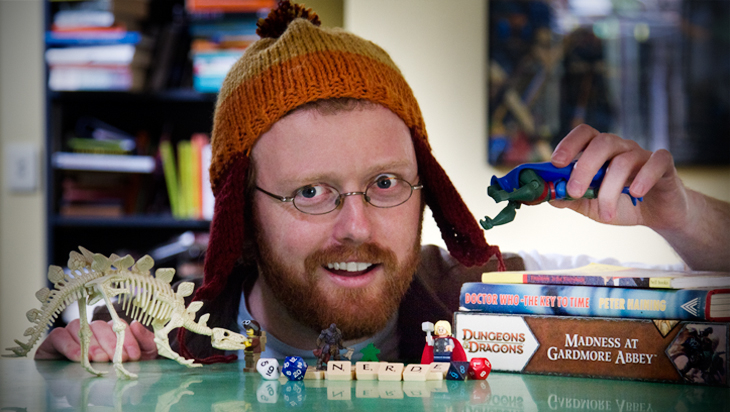 Ben McKenzie, also known as The Man in the Labcoat, has been spreading his intelligent geeky comedy around Australia for ten years. This includes comedy tours of the Melbourne Museum, performing a comedic version of Dungeons & Dragons (Dungeon Crawl) and performing with the Anarchist Guild Collective sketch troupe.  In 2012 Ben appeared in eight different shows at MICF but none of them were his own Solo show. In 2013 Ben took part in celebrating 50 years of Dr Who with the monthly live podcast ‘Splendid Chaps. This year Ben and the Splendid Chaps team are working on an online audio series called Night Terrace and Ben is performing a solo festival show at The Melbourne International Comedy Festival called Ben McKenzie is Uncool.

Lisa: How long has it been since you last did a solo show at MICF?
Ben: Seven years! I’ve done a few smaller solo shows here and there, and plenty of solo work – MCing corporate events, charity gigs and conferences, plus presenting and spots here and there – but it’s mostly been, and continues to be, collaborative stuff for me, like Dungeon Crawl, Splendid Chaps and Night Terrace. So this is pretty exciting!

Lisa: You said in our last interview that your next solo show would be about Nerd culture is that how it turned out?
Ben: …sort of. I mean, yes, I talk about stuff that is part of geek culture, and I talk about why I love it so much. It’s that rejection of cool, of embracing passion and enthusiasm, that’s such a part of being a fan of things.

Lisa: Tell us about Ben McKenzie is Uncool
Ben: It’s a whole pile of (un)cool stuff, essentially: little bits of all the things I love. What I was saying about nerds embracing enthusiasm and passion, that’s what this show is about – the things for which I’m a fan, that mainstream culture perhaps doesn’t embrace in the same way. I want to share them with the audience!

Lisa: Will it be a more general show about nerdery in your science professorial style or will it have some personal stories as well?
Ben: There’s a little bit of personal stuff, but mostly just as background for who I am and where I fit in. Establishing nerd credentials, you might say – though also rejecting the idea that those should be necessary! Mostly though this show is not about me, it’s about some of the things I love, which probably says as much about me as anything else. 😉

Lisa: How do you tend to write shows; all at once, long and slow, at a set time and place every day…?
Ben: In the past I’ve come at it from a very theatrical kind of bent. I would workshop ideas and then script the entire show, then learn it like a monologue. But this show has been different, partly because I haven’t had time to do that, and partly because it’s a show made of lots of parts. It was an interesting development process, I didn’t know exactly what it was going to be, but I had a pretty good idea of what I didn’t want it to be! So not just stand-up, but using other skills I have; it has a bit of sketch, and some games and impro. I’ve worked on it in fits and starts, whenever inspiration took me. I come up with a lot of ideas in the shower for some reason, when I’m least able to write them down! And it’s not all new, I should say; it’s got some stuff I’ve written in the last few years, but it’s stuff comedy festival audiences probably won’t have seen.

Lisa: Will you be doing any other shows in the Festival this time?
Ben: Nothing official, this year – which is quite a departure for me. For the last six years I’ve usually been in three to five shows each year, though mostly they weren’t long runs. I’m sad to miss out on Late Night Letters & Numbers this year; typically the year it clashes with something else is they year they make it into the Town Hall! But they have Lawrence Leung on board filling my spot at the whiteboard, who I know will smash it out of the park. (Though I’ll lay odds he won’t get as many solutions as I did. Take that, racist stereotypes!) Richard and I are doing two late night Dungeon Crawl shows during MICF as part of our final regular season, but they aren’t officially part of the festival.

Lisa: You spent a lot of last year working on Splendid Chaps, now that it’s over how do you look back on it?
Ben: It’s funny, I often have trouble talking up my own work, but I’m really proud of Splendid Chaps. I wanted to talk about this show that I love so much, but make sure the podcast wasn’t like all the other ones, and that it wasn’t just about Doctor Who. That’s why we had the guests, and the broad topics, and performed (nearly) every show to a live audience. And I think it worked. It’s one of the few things I’ve done that I go back to every now and then and listen to, because the guests were so great and the conversations went to interesting places I didn’t expect. And that’s just the stuff that made it into the podcast! I really must get the raw recordings from John and listen to the full versions some time.

Lisa: How did you and John get together and decide to do it?
Ben: It was kind of my idea. John and I met through Boxcutters, the TV podcast; I knew host Josh Kinal through some friends and did a guest spot. We discovered our mutual love of Doctor Who and got along really well, so we used to go out on these “nerd dates”, as John called them. We’d have a coffee and talk about the new series and possible casting and our opinions of the old series. John had an idea for a pretty nerdy show he wanted to do with me, though it didn’t work out; then when the anniversary was coming up, I thought it was high time I talked about Doctor Who in public. I mean why not? I love it, other people love it. And I wanted to get into podcasting, to make something that would persist; the vast bulk of my work is live only, so you can’t show it to anyone. I love that but I wanted to record something. The idea for Splendid Chaps came to me nearly fully-formed, and I pitched it to John, and he loved it, tweaked it a bit, and that was that.

Lisa: How did you meet Petra and get her involved?
Ben: I met Petra through a mutual friend years ago, when she first moved to Melbourne. We hung out a bit. I’d seen her perform a couple of times and we caught up again a couple of years ago, and it struck me she would be great to work with on the Melbourne Museum Comedy Tour. And I was right! Originally the idea for Splendid Chaps was that we’d have a different announcer/co-host every episode, and I invited Petra to do the first episode; she has a brilliant voice for that kind of work. But then she worked so well, and the audience loved her too, that we just decided she had to stay! And she’s really part of the Splendid Chaps family now. We couldn’t do the show without her.

Lisa: Do you have Splendid Chaps Highlights?
Ben: Oh, loads! The Seven/Religion episode is probably my favourite, and getting to take the show to Sydney thanks to the support of fans through our crowdfunding campaign, that was amazing. Meeting Alexandra Tynan, the designer who created the Cybermen, was fantastic; she’s so wonderful! But most of all I think I loved the songs! Finding those old songs about Who and reviving them for the show, and getting to pay these wonderful performers to cover some truly awful tunes. I love them all, but performing The Universe is Big and blowing bubbles into the audience was a moment I’ll always treasure. I also absolutely love Georgia Fields and her cover of Doctor Who Is Gonna Fix It, this ridiculous song from the 80s by Australian band Bullamakanka. And getting Keira Daley to cover Jackson Zumdish’s I Wanna Be Doctor Who…I don’t think she’ll ever forgive me, but it was totally worth it.

Lisa: Tell us about the new project for the Splendid Chaps team Night Terrace.
Ben: Night Terrace is an audio series, so like a radio serial, a bit Hitchhiker’s-esque I suppose! It’s not a podcast, we’ll be selling it as a digital download; you get the whole thing all at once, eight episodes in this first series, kind of like a Netflix original show, or the newer stuff from Big Finish. It’s a sci-fi comedy, in which adventuring scientist Anastasia Black (Jackie Woodburne, best known as Susan on Neighbours) quits her job saving the world for a secretive government organisation and tries to retire to the suburbs. But just as she’s trying to get rid of a door-to-door electricity plan salesman, her house starts travelling through time and space! So she’s stuck having these fantastic adventures with this guy, and it just makes her seriously annoyed. She hates it! But they have to try and survive and make their way back home by figuring out the mystery of this house. They also meet this mystery woman, “Sue”, played by Petra…but I can’t reveal too much. I’m playing the sidekick, Eddie. He’s the salesman, but he’s also a university student; someone who’s studied a lot but doesn’t have practical, real-world experience. He’s a bit useless most of the time, but excited about their adventures. A nice counterpoint to Anastasia being grumpy about it.

Lisa: How did you get Jackie Woodburne involved?
Ben: We asked her! John just got in touch and pitched it to her. She was our first choice and she said yes! We were over the moon. She’s so perfect for it, and it’s going to be great fun; Anastasia is a very different role to Susan Kennedy!

Lisa: Will Night Terrace involve any live performances?
Ben: We have talked about it, but it’s difficult. There have been some great live radio play style shows in recent years, like the superhero story Bullet, but those were written with that sort of performance in mind. And being sci-fi, there’s a lot of effects and post-production work needed; David Ashton, our fourth Splendid Chap and professional sound engineer, who’s also writing an episode (he used to write and perform on The Third Ear with John on RRR), he’s got his work cut out for him! That said, we’re planning on having a live event to launch the series, to which many of our Kickstarter backers will be invited, and we will have live performance at that. We might write something especially for that, though it’ll probably be difficult to fit that into Jackie’s Neighbours commitments!

Lisa: Will it have a finite number of episodes or will it be ongoing?
Ben: We’re approaching it like a TV series, so what we’re writing now is a first series of eight 25-minute episodes. If it’s popular and sells pretty well, we’d love to come back and do more series later on. We already have lots of ideas about where to take it!

Ben McKenzie is Uncool at The Provincial Hotel during Melbourne Comedy Festival.

The podcasts for Splendid Chaps – A year of  Dr Who celebrating the 50th anniversary of Dr Who can still be found on the website if you missed out on it last year.